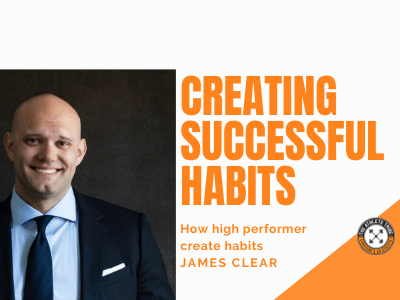 When it comes to improving your performance, creating positive habits is key.

In his book “Atomic Habits,” author James Clear offers a guide on how to go about building high performance habits.

James talks about five areas that we should be focussing on:

So, if we think about point one – self-improvement – James suggests that if you can improve by just one per cent each day for an entire year and those gains compound, you would end up thirty-seven times better at the end of the year.

Therefore, minimal viable habits, or one per cent gains day in, day out, over weeks, months and years, lead to substantial overall improvements in performance. And if we think about it, this is no surprise to a certain degree. For example, professional footballers start playing at a young age; they get accepted into an academy at eight, nine, ten years old. All they need to do is improve a little bit every year, year on year, until they become a professional football player. This principle applies to all of us. The problem is that I see too many people saying, “I need to train for three hours a day. I need to eat all these vegetables. I need to sleep 10 hours a night.” But the problem is that these are big asks; what we need to be doing is focussing on the one area or the one-percenters that will help us push forward.

In his book, James references the work of Sir David Brailsford, the former Performance Director at British Cycling. Team GB cycling had only won one gold medal before the 2008 Olympic Games. But in 2016, the team won a combined 66 gold medals in the Olympics and Paralympics. This is a huge achievement, and Brailsford put it down to a term called “marginal gains.” Marginal gains mean by improving by one per cent in lots of different areas, you will improve your overall performance.

While marginal gains are a great way to improve, we need to have that base level of a foundation. So, if you’re not sleeping enough, if you’re not eating consistently, those marginal gains become harder to achieve. Brailsford knew that to achieve marginal gains, other areas needed investment. So, in 2003, he got a team to redesign the saddles so they were more comfortable for the riders. British Cycling invested money into the right shorts to keep the muscles warm. They looked at suitable massage gels that helped with recovery. They got surgeons to teach the staff and athletes how to wash their hands thoroughly to reduce the risk of illness and bugs. They went into wind tunnels to look at aerodynamics. They invested in travel mattresses for the athletes to help them sleep. So, little things can add up to substantial performance gains.

Focus on systems and not goals

Now to James Clear’s second point. If you want better results, focus on systems, not on goals. So, if we imagine a football game, both teams are trying to win, they have the same goal. But that’s not important; instead of focusing on winning, the team should be focussing on their systems. Goal setting is important; there’s no denying that. I have spoken about the importance of setting clear goals many times, but we get so obsessed with it, and I think that’s largely down to our consumption of social media. Hashtag goal setting is everywhere! People are constantly talking about working towards their goals or what their goals are. However, they rarely talk about the systems that they’re putting in place to help achieve them. Also, there’s a couple of big areas that negatively impact goal setting.

For example, I want to run a marathon. How many times have people ran a marathon and then stopped running afterwards?

That’s not the point. The point is long term self-improvement. They needed to think about becoming a runner, not necessarily a person that has run the marathon.

So, to create positive habits, make sure that you’re focussing on the systems. What do I mean by that? Say you want to go to bed earlier or increase your amount of sleep; you need to put a system in place. Turn your phone off 90-minutes or an hour before you go to bed; make sure that you’ve deactivated that “play next” button on Netflix, so you don’t get sucked into that rabbit hole. You can improve if you put a system in place.

It’s more effective to focus on who you want to become than what you want to achieve, which brings us to point three.

If you want to eat healthier, the focus should be on becoming a healthy person overall. This means you have various areas of improvement to think about, not just one aspect of training, business, life, nutrition, whatever it might be.

Think about who you want to become

It’s more effective to focus on who you want to become than what you want to achieve, which brings us to point three.

If you want to eat healthier, the focus should be on becoming a healthy person overall. This means you have various areas of improvement to think about, not just one aspect of training, business, life, nutrition, whatever it might be.

The four laws of behaviour

Point number four is more specific and explains how to create these behaviours. James Clear talks about the four laws of behaviour to create high performance habits,

You want to make the cues of your good habits obvious, available, visible, easy to see. The easier it is that they catch your attention, the more likely you’ll fall into the habit. To break a bad habit, you just invert each of the four laws. So rather than making the cues of your bad habits obvious, you want to make them invisible, unattractive, difficult, and unsatisfying.

The importance of environment.

This leads on to point five: the importance of environment.

The things that are on your desk at home, your kitchen counter, your office at work influence your behaviours, so if you can restructure your physical environment or your digital environment, you’re more likely to stick with the right habit. James Clear likes to make sure his phone is in another room when he’s working, so he’s not distracted. For me, this comes back to the importance of flow for performance. You need 100 per cent concentration on one thing to truly immerse yourself so that you get all the benefits of that state. Removing your phone removes that chance of distraction. Now, it might not be possible for you not to be next to your phone, but is there a way that you can control your environment for an hour, a day for you to do the deep work that you needed to do? Your social environment also impacts your ability to form positive habits. For example, if you socialise with fit and healthy people, you’re more likely to become a fit and healthy person. And the opposite is true. So, think about your environment and how you can shape that to help you with creating positive habits.

To summarise, these are the five areas to help you form high performance habits: Compound self-improvement (marginal gains); focus on systems and not goals; think about who you want to become; the four laws of behaviour; and the importance of environment.

Thanks for reading, watch the video here.

Why not download our free guide to 3 practices to optimise your stress response here.

Join the cognitive athlete programme to become a better leader and performer here.