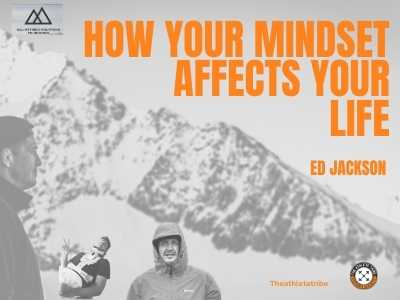 According to Ed, his amazing journey from intensive care to the top of a mountain was all down to mindset.

“I realised that actually, the way to move forward wasn’t to try and physically move forward, it was actually to look after myself mentally first. If I wasn’t in a positive mindset, my body didn’t seem to react,” said Ed, during his recent chat with The Athlete Tribe.

While scaling Snowden might have seemed like a ridiculous goal for someone who had fractured his C6 and C7 vertebrae, shattered a disc, and been resuscitated three times, Ed didn’t put too much pressure on himself.

“If I could set myself up for those little wins day by day and have the bigger dreams in the background, but putting some process goals in place and succeeding at them, it was keeping me positive. And then, you know, those small steps turned into bigger results in the long run,” he said.

For Ed, those small steps were things like lifting an arm or wiggling a toe. However, progress was slow at first.

“I would be like, right today I’m going to try and move my next finger a little bit further. And I’d spend all day trying to do that. And then if I got there, I’d feel good,” he recalled.

“That was kind of the first process of me learning to stay present and focus on the task at hand and sort of control the controllables, if you like.”

While Ed’s positive mindset was a driving force in his remarkable recovery, he admits he had some very dark days in the early stages.

“During the day when I was hiding my emotions and staying positive and trying to sort of put a smile on it, actually by forcing myself into that mentality, it actually did make me feel more positive during the day. But then the ramifications at night were it came back to bite me in the arse big time, because then it all came dumping down on me because I didn’t have that act to put on anymore,” he said.

Ed quickly realised he needed to open up.

“I started a blog sort of two weeks in just off voice notes. And I started getting contacted by people who had been through similar things or just strangers that I didn’t know who were offering me bits of advice. And I could start to speak to them and be completely honest with them with things like last night I had thoughts about, you know, wanting to try and end it all. And this is something I would never tell my family and friends and not anything I would write in the blog because I know they’re reading it.”

Letting his emotions out was so important for Ed.

“At the same time as putting on an act, I wasn’t bottling everything up because luckily I had this outlet. And actually that made me realise that talking about what I was going through and the state I was in was really powerful because as a young bloke, especially as a rugby player, you’re taught to show no weakness.”

Ed said his initial macho attitude was eating him up inside.

The Power Of Vulnerable

Ed spoke about the importance of vulnerablity in his recovery and how the impact that it will have on anyone.

“I found it really hard to be vulnerable. But then when I did start to be vulnerable, I felt the rewards. And now, you know, it’s something that I’m probably too open and honest about my emotions now. People are like, shut up, we don’t want to hear about it. But it was a bit of a lifesaver for me in terms of my mentality, especially at the fact that I didn’t really want to be that way with my immediate support network.”

So, what advice would Ed give to others struggling mentally, especially those from the sporting world?

“Open up! So many people don’t want to open up to their team-mates or their friends or family because they feel like they’re going to get judged, which they won’t. But I understand them feeling like that because I felt like that. So I would, you know, really advise going to speak to someone, a stranger or speak to a professional. There are lots of groups out there of people going through similar things. And once you start that process and get the ball rolling and start to feel the rewards of it, it won’t be long before you start opening up to the people you know as well.”

In addition to opening up about his feelings, another help for Ed was his understanding of what the human body is capable of.

Ed had spent much of his former life as a professional rugby player rehabilitating injuries. While they were minor compared to a broken neck, he understood the mental and physical process required to return to fitness.

Despite his incredible recovery, Ed’s spinal cord damage means he’s still medically quadriplegic and suffers from Brown-Sequard Syndrome, a neurological condition resulting in weakness or paralysis of one side of the body and loss of sensation on the other. Ed has difficulty with things like temperature regulation and bladder control. He also walks with a limp.

But Ed won’t let his disability get in the way of achieving his goals and his mindset is what leads the way.

After his incredible success with Mount Snowdon, Ed set up a charity called M2M – in reference to his journey from millimetres to mountains – and completed new challenges, like leading a group of ex-rugby players to the summit of Mount Buet in the Alps and climbing Mera Peak in the Himalayas. In April 2020 he also climbed the height of Mount Everest in his parents’ house, by walking up the stairs 2,783 times. Ed was hoping to climb the real mountain, but travel restrictions due to COVID 19 meant it wasn’t possible.

Ed’s climbs have raised hundreds of thousands of pounds to help sufferers of spinal injuries.

If you’d like to support his charity, visit www.millimetres2mountains.org

Thanks again for Ed to take the time to speak to us.

Please head over to the YouTube Channel to watch or listen via The Athlete Tribe Podcast.

Check out our key performance messages here. Mindset is one of them.